What I have learned from a street photography course

A course to learn street photography?

It is just walking around and shoot some pictures right?

These where my first thoughts when I have chosen to start with Street photography. It begun a couple of weeks ago, when I was visiting Utrecht, I took my camera and start shooting the streets. Actually, most of the time I was shooting buildings and and people from a distance with my Canon 350d and a 70 - 300mm lens. As Happy I was, I shared my photo's on Instagram and see if people liked it. Okay, I must say they do, but a small amount of people. A couple of days later I was looking on the internet for some street photographers. It looks so simple, but what is the art of this style of photography? First of all I need to buy a better camera for the professional street photographer to be ;).

So I bought myself a FujifIlm X100F. From my research I have done, one of the best street camera in the universe! I will write a blog about this beauty, but first we need to understand each other. From my first shot, i am stunned about the quality of the pictures.

Now I have bought this cam I had to wait many weeks before I received this beauty. I was searching on the internet with my great friend "google" about street photography. I came across the website of Ian McDonald (www.ianmcdonaldphotography.com).

Before reading one of his blogs, I checked his gallery. His photos are looking so easy, so simple... amazing work. Read about his,life and how he is breathing photography. Great blogs to read! You should definitely do. And then I came across his page where he wrote about his visit to Amsterdam and the course he is going to give. My thoughts, let sign me up, I think I can learn something from him :D. Happy to receive his email with the approval to join him. The course was just for four people and I was one of them :).
Go to Amsterdam Gallery

Saturday morning 23rd of September, 9am at Dam Square Amsterdam. I was the last guy who joined the small club. Dam Square was almost empty, couple of tourist, some security guys who prevent from putting the rented bicycles to the national Monument.

Ian, a Canadian guy from Vancouver made some jokes about people he run into yesterday and they thought he was American. I have already learned one thing this day. Don't say American to a Canadian guy. I met the other students. A guy from Apeldoorn, A from Antwerp, a woman from Wijk aan Zee with the original X100 camera even Ian didn't have seen the grandmother of the X100F. It was a great group of people with the same passion.

The workshop started and we got our first lesson of "building" the image. How to use shadows and lights. We used each other as test subjects. We have learned our first skills. the next part before we got released in the crowed.

The experience of one hour personal education

Everybody got one hour from Ian personal coachingg. Everything about street photography was new. What can you learn in one hour, I will tell you a lot.. the most important thing is the way he looked through is eye to a city. It is like he has 10 eyes, no I think 360 eyes around him. It is amazing what he sees. First he learned me looking for a nice spot. He brought me to the parallel street of the Rokin, called Nes. We went into a small street to a corner. In the from of us was a small cafe called van Kerkwijk. And now we are going to wait. Wait for the right person who is going to pass. I was a quiet street just outside the busy city center. After a couple of minutes, finally, there was somebody. He told lower the camera to the ground, at the height from the person who would pass, hold your AFL (autofocus lock) and wait. And the moment the person passes, it took took some photos. It was not yet the right person. After a while, somebody on a bicycle passes by. Again, not the right person. We did achieve to get a good image. Besides you need to wait on the person, you need to keep and eye on the composition you have chosen. It takes time, a lot of time to get the right shot.

The next phase was to practice framing. It was on the Rokin, on the other side of the street. I had to focus to the selected frame of a small shop. I did not capture a interesting picture, but a couple of meters to the right. This was more interesting. I need to get one person in the middle of the two windows. Don't loose your composition, watch his footsteps. This was hard. What you want to achieve is: both feet or on the ground, like an upside down V, or one part of the W :). The W are like two people following each other.. haha. Took some time, but I understood the drill. This time I got some pictures and on the right, this one i liked the most.

Phase 3 was to choose a smaller frame, get more close to somebody. I have chosen a place behind a trash can. The frame existed of two umbrellas and a pair of chairs and a table in between. I have waited for about 10 minutes and got about 20 shots and I think three shots where usable. A man with a troly and a woman who would cross our lenses. Ian did not want to miss the shoot and choose for continuous shot. I didn't and try to catch the moment. Let me show you on the right. It is not my best, but i managed to get her in the middle of my frame. After this moment, to many people or groups came by.

Have patience, he told me :). Then it happened, an interesting older man came to the trash can to extinguish his cigarette. He did not notice we took a shot and it was a nice shot. He wear a cap and smoke came out his nose. Ian told me, people do what they do and do even know you are there. 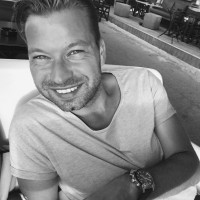 Was a great day in Amsterdam! Great photo’s! Great text!.

Woah! I’m really loving the template/theme of this website.
It’s simple, yet effective. A lot of times it’s hard tto gget that “perfect balance” between user
friendliness and visual appeal. I must sayy you have done a excellent job with this.